Wannabe Critic Tries to Extort Money From Restaurant Owner, Gets Called Out 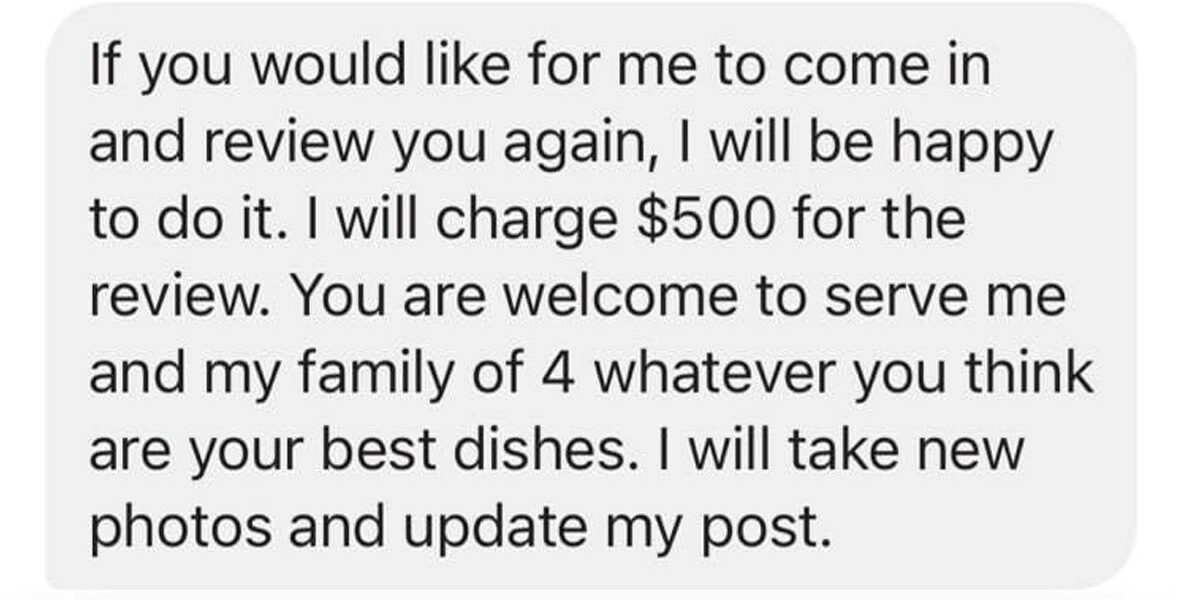 Letting regular people write restaurant reviews was largely a mistake. And I say this as a recovering Yelper. Before I started working in the restaurant industry, Yelp was an outlet for me. It allowed me to share my Very Important opinion with other citizens. I’d write paragraphs about a breakfast burrito, cringey raps about the best pizzeria near my office. And while I mostly wrote favorable reviews of establishments, occasionally I would go in on a spot that was disappointing in both the food and service areas.

The truth is, however, that what one person thinks is worthy of three stars is another (less sane) person’s one star. I can’t even count the number of times I’ve seen a one-star review because a person was unable to make a reservation. Reviews can really make or break a business. Once they have a bad reputation, it’s very hard to undo it. Karens shouldn’t be able to use these reviewing sites to enact their irrational and entitled revenge.

While carefree one-star reviews are one of the biggest problems that restaurants face thanks to Yelp and Google reviewers. There’s a whole other set of people plaguing the restaurant scene, and it’s the wannabe critics who think that writing reviews entitle them to free sh*t. I love a check-in treat as much as the next person, but there are people out there who actually write negative things about a business as an extortion tactic. One such case was shared on Facebook recently by a frustrated business owner. She shared the review in question, which isn’t all bad, and her response, which reveals that the woman who wrote the nonsense had messaged her trying to get $500 and free food in exchange for a review update. The restaurant owner provided the receipts — and they do not look good.