Viral Thread: Worker Quits on Second Day After Lies From Interview Are Exposed 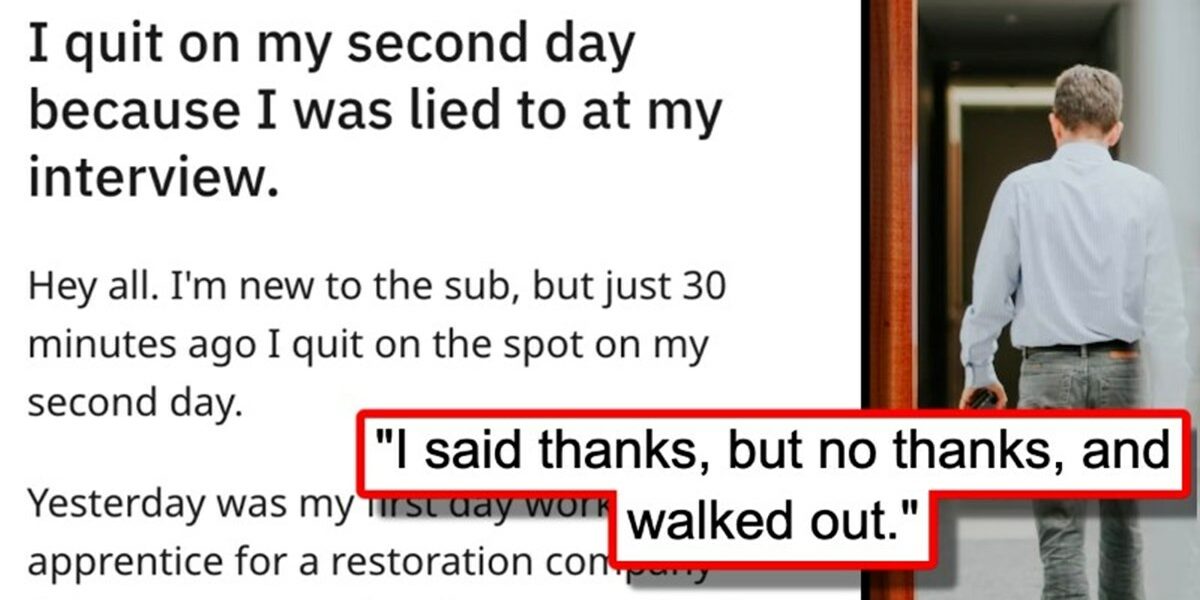 This restoration apprentice reported that he left their new role on the second day after discovering the employer had lied about the working hours during the interview process. He shared his experience on the popular r/antiwork subreddit, where it got viral views.

The thread was shared by Reddit user u/ButtKylerJr, who titled his post, “I quit on the second day because I was lied to at my interview.” He goes on to explain that family time is incredibly important to him, and while he was interviewing for a role as a restoration apprentice, he was promised that “[They] would be working from 7:30 to 4:00 (4:30 at the latest).” This was revealed to be a complete fabrication when, on his first day, he was required to work until past 6:30 pm.

Not only did this make him late home, but it also made his wife late for her job.

When he returned to work the next day he was criticized in front of the entire team for the way that he left the previous evening, that was the final straw and enough for him to walk away.

Readers had the following to say in the comments.

“Not fired but berated in public?” remarked mkbloodyen. “Sounds like they are hurting for staff.”

“Having worked with a couple of these restoration companies, I have to say, I have never seen a decent one, ever,” said JustAbicuspidRoot. “Each time I have had one come into my home, I had to threaten to sue them and then rip them apart on all online review services just to get them to finish the job in a timely manner. In short, these predators will come into your home, block the entire thing off while they bilk your insurance company for months on a job which should take no more than a week.”

“You nailed it,” replied the original poster. “There were 3 of us on the board up. They finally sent another person after the 1st hour. One was standing around not doing much. The other was moving nice and slow, bilking away. Then there was me. Busting my ass moving as fast as possible trying to get home.”

Keep reading to see screenshots of the thread and reactions below.